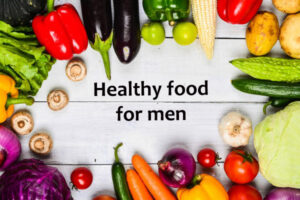 Whether you’re 25 or 45, eating a nutrient-dense diet is key to staying healthy, lean, and strong. For men, that means making sure you eat three well-balanced meals every day, including breakfast.

According to the American Heart Association (AHA), men who skip a morning meal have a 27% higher risk of having a heart attack or dying from heart disease than men who don’t. So, listen up, lads! Here, we reveal foods all men should incorporate into their diets, plus delicious (and easy!) ways to add them to each meal.

Often skipped over in favor of almonds or peanuts, Brazil nuts are packed with magic for your manhood. Selenium is a trace mineral found in Brazil nuts that plays an important role in hormone health. You only need a tiny bit for healthy sperm, but a tiny deficiency can be catastrophic for reproductive health. In one study, men who had lower testosterone and were infertile also had significantly lower selenium levels than the fertile group.

Recent University of Texas findings suggests that men who drink two to three cups of java a day—or 85 to 170 milligrams of caffeine from other beverages—are 42 percent less likely to have erectile dysfunction than those who consume less of the stimulant. And those who throw back four to seven cups were 39 percent less likely to have the condition. The trend holds true among overweight, obese and hypertensive men, but not for those with diabetes, a condition that often causes the issue. So, how exactly does drinking coffee keep things going strong? The scientists say that the stimulant triggers a series of reactions in the body that ultimately increase blood flow to the penis.

“Spinach is rich in magnesium, a mineral that decreases inflammation in blood vessels, increasing blood flow,” explains Cassie Bjork, RD, LD, of Healthy Simple Life. And when it comes to a man, blood flow is everything. Spinach is also rich in folate, which increases blood flow to the nether regions, helping to protect your guy against age-related sexual issues.

Watermelon is one of the richest natural sources of L-citrulline, an amino acid that can help make your erection harder. Once it’s in the body, it converts to L-arginine, stimulating the production of nitric oxide, which increases blood flow to the penis, strengthening erections.

Potatoes—whether they’re the white or the sweet variety—are a great source of potassium. This nutrient boosts circulation, which keeps blood flowing where it needs to go and boosts your bedroom pleasure. It also counteracts salt-related bloating, so you’ll look better naked, too.

Whether you’re simply trying to stay healthy or trying to improve your heart health because you’re already suffering from heart disease, omega-3s can help, say the experts at the National Institute of Health. How? The healthy fat helps reduce triglycerides (the fats that can build up in your blood and cause a heart attack) and also diminish the risk of an irregular heartbeat. To reap the benefits, pick wild over farmed and check out these healthy salmon recipes.

Broccoli is packed with sulforaphane, a compound that wards off inflammation, improves blood sugar control, and protects blood vessels from the cardiovascular damage that’s often a consequence of diabetes. Add it to omelets, stir-frys and pasta dishes.

Source: The 50 Best Foods for Men | Eat This Not That!